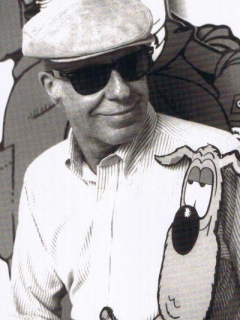 Born on May 18, 1931 in Paterson, New Jersey, Martin studied illustration and fine art at Newark School of Fine and Industrial Arts between 1949 and 1951 and subsequently graduated from the Pennsylvania Academy of the Fine Arts in Philadelphia in 1952. In 1953, he worked briefly as a window trimmer and frame maker before providing paste ups and mechanicals for various offset printing clients and beginning his career as freelance cartoonist and illustrator. Martin's work first appeared in Mad in the September 1956 issue.

Martin often was billed as "Mad's Maddest Artist." Whereas other features in Mad, recurring or otherwise, typically were headed with pun-filled "department" titles, Martin's work always was headed with only his name—"Don Martin Dept."—further fanfare presumably being unnecessary. At his peak, each issue of Mad typically carried three Martin strips of one or two pages each.

Although Martin's contributions invariably featured outrageous events and sometimes outright violations of the laws of space-time, his strips typically had unassuming generic titles such as "A Quiet Day in the Park" or "One Afternoon at the Beach." The six-panel "The Impressionist" features a bull who becomes a famous artist by smearing a man and displaying his remains as an abstract painting. The four-panel "One Night in the Miami Bus Terminal" presents a man who approaches a machine labeled "Change," inserts a dollar bill, and changes to a woman. In another gag, a man is flattened by a steamroller but is saved by the intervention of two passersby, who fold him as a paper airplane and throw him to the nearest hospital.

Story: One Day at the Beach
Colorist, Artist with Sergio Aragonés
Department: Don Martin Dept.
Story: While Strolling Through the City
Artist, Writer

Department: Schtick it in Your Ear Dept.
Story: Don Martin Sells Us Sea Shells by the Sea Shore
Artist, Writer
Back Cover: One Day in Metropolis
Writer, Colorist, Artist

Story: Don Martin's Version of a Movie of Ecchcaliber
Artist with Larry Siegel

The Mad Adventures of Captain Klutz

The Mad Adventures of Captain Klutz

One MAD Day with Don Martin

MAD a presenta as aventuras do Capitao Klutz #1

The MAD Adventures of Captain Klutz