Today we start a new department on MADtrash.com, where MAD collectors can show their most precious items! The first contribution comes from Gary L.Kritzberg and he is showing us a very old MAD collectible!

The celluloid pinback process was invented in 1896 and immediately patented by the Whitehead & Hoag Co of Newark NJ. Whitehead used distinctive German inks and they put tiny papers on the reverse side of their pinbacks to advertise their company. Late 19th century and early 20th century Celluloid pinbacks are highly collectible for their themes, color, size and rarity. Pinbacks were a huge fad between 1896 and 1900. Often people were so interested in them that they would stop the wearer to get a closer look. The buttons from this early era are generally 1 1/4″ in diameter or less. Whitehead & Hoag pinbacks are known for their very detailed graphics and more then one famous artist worked directly for W & H in designing the pinback art. Buttons of this era are considered part of the “golden age”. Ted Hanke,the most acclaimed pinback expert writes in his book “Collectible Pin-Back Buttons 1896-1986” “The success of the button idea was astonishing, and buttons swept the country on an avalanche.” Ted Hake also notes in his book that famous artists, Norman Rockwell, Harrison Fisher and Maxfield Parrish all worked for W&H directly designing pinback art. Pinback collectors understand that one of the major obstacles of finding great early pinbacks is that often they were produced in very small numbers and they were often discarded after the “fad” period ended. Many rare political pinbacks have topped the $10,000 mark and non-political pinbacks gaining in value in recent years with many in the $1,000 range. 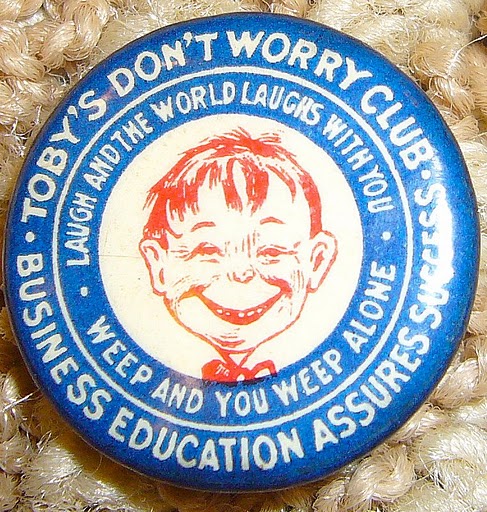 The pinback featured in this article is only 3/4 inch in size and has all the features of a very early Whitehead and Hoag pinback; outstanding color, graphics, size, and a significant amount of information written on such a small button. One almost needs a magnifying glass to make out the information. This example is of special interest to those who are familiar with “Pre-Mad” images of the infamous What -Me Worry kid, Alfred E Neuman. The outer circle reads “Toby’s Don’t Worry Club” “Business Education Assures Success”. The inner circle reads “Laugh and the World laughs with you” “Cry and you Weep Alone”. Wow Mad fans if you didn’t catch it……..how about the reference to “WORRY” and the obvious pre-Mad Alfred image!! Until now the 1911 Wura -Wura book that depicts an early pre-Mad image was the earliest known/ dated reference to the “Worry” quote. As all collectors of Mad magazine and Alfred E Neuman know the quote, “WHAT-ME-WORRY” is synonymous with Alfred E Neuman of today. Expert pinback collector have dated this pinback featured here to between 1898 and 1910. This pinback is the only known example to exist. Based on the information presented here it is likely, that this pinback is the oldest known item that definitively proves the basis for Alfred E Neuman’s association with the “What Me Worry” quote.

Check out the MADtrash database entry

Every MAD collector in the world is invited to present their most precious items in this section…just contact me!!