MADtrash.com proudly presents the Al Feldstein Interview from April, 1966!! The READ Magazine granted us the one-time, non exclusive permission to print this amazing piece of history on MADtrash.com!! Have fun!!!

By EDWIN A. HOEY 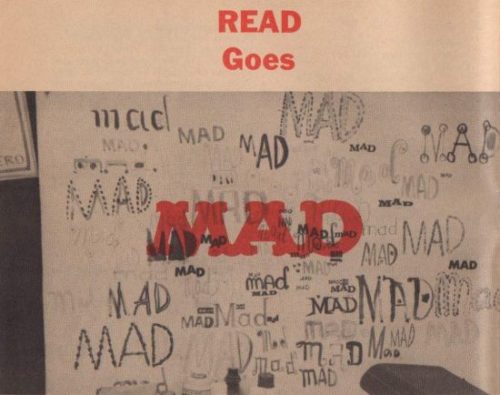 THE suite of five rooms is on the fifth floor of a New York skyscraper. Below is the bustling confusion of Third Avenue. Above is the relaxed confusion of the editorial haunts of MAD Magazine.

Although my interview with editor Albert Feldstein had been set in advance, I opened the outer door with some trepidation. Would I be greeted with several pies in the eyes? Would a gaggle of joke writers be swinging from the chandeliers?

Would the great Alfred E. Neuman himself drop a banana peel below my unsuspecting foot?

The surroundings were certainly mad enough. Alfred E. Neuman ‘s face came at me from all directions, as though the Cheshire cat, with one tooth missing, were appearing and disappearing in a wild whirl. A poster proclaimed: “Up with Finks.” A featherless rubber chicken dangled from the ceiling. A list of instructions admonished the staff: “Do not forget the benefits you receive here and do not, therefore, complain of anything . . . . Do not tell lies . . . . Do not be unreasonable. . . . Honor your elders and betters. . . . Be glad you ‘re alive.”

Mr. Feldstein appeared through the maelstrom and led me to his office. Surprisingly, he seemed quite sane. “Don ‘t let the atmosphere scare you,” he said. “We have kids dropping in all the time?sometimes out-of-towners dragging along their parents, and sometimes even classes with their teachers. If we don ‘t look zany enough, they feel let down.”

MR. FELDSTEIN sat down at his desk, beneath still another portrait of Alfred E. Neuman, and leaned back in his chair.

My first one concerned Alfred himself. For a long time I had wondered where he came from.

Thoughts of Alfred brought an affectionate smile to Mr. Feldstein. “We don ‘t know where Alfred ‘s career began, but we ‘ve traced him back beyond the turn of the century. A painless dentist used him for advertising, and he showed up on humorous calendars and postcards. He was considered the classic example of the country bumpkin.

“Alfred didn ‘t come to us until 1956. We had started MAD back in 1952, more or less so the editors here could enjoy themselves. We were turning out various publications on cowboys, romance, and science fiction. But no one was publishing a humor magazine, and we thought it would be fun to try.

“The first three issues all lost money. Then we hit on the idea of parody and satire. Issue four contained a takeoff on Superman called Super-Duper Man. It was a sellout, and we knew we had found the right approach.

“Then came Alfred in 1956. That was an election year?Eisenhower versus Stevenson?and we decided that MAD should have its own candidate. We took the country bumpkin and dubbed him Alfred E. Neuman. I don ‘t know where the name came from, but we ‘d all been knocking it around the office. In fact, I had used it as a pseudonym on various stories.”

With Alfred disposed of, I asked Mr. Feldstein another question which has long intrigued me: “How is MAD made, and where do you get your ideas?” 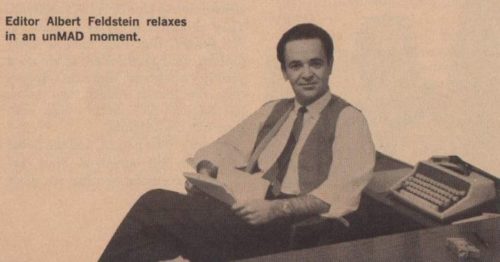 “Mainly just from living,” he replied. “We ‘re not intellectuals here. We ‘re just human beings who keep a clear eye on life and try to spot its absurdities. For instance, we might just do a takeoff on Hogan ‘s Heroes because of its misleading viewpoint. Anyone watching the show might think that World War II was all fun and games and the Nazis nothing but jolly nincompoops.

“Once we get an idea, we start knocking it around. Actually, the staff here is very small ? the publisher, two other editors, an art director, and me. We have many freelance writers and artists who work for us. Maybe one of them will suggest an idea, or perhaps a reader will write in something. We develop the idea here, working up lines and situations. Then we give it to the artist.

“The artist is free to add any touches that he thinks will help. Since most have worked with us for a while, they have a good idea of what we want. When the strips come back here, we refine them again?adding touches that didn ‘t occur to us the first time through. A finished story can represent the skills of many different people. 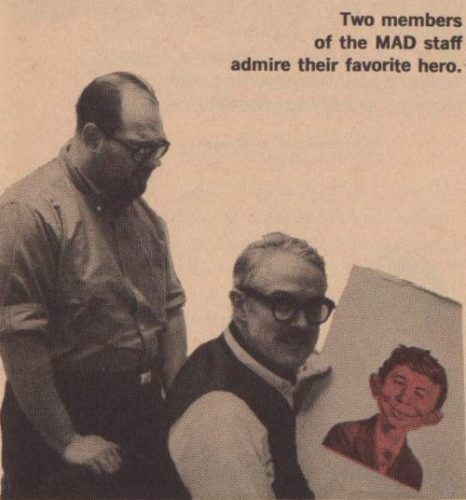 “Incidentally, we ‘ve never yet had a serious complaint from people or companies we ‘ve spoofed. TV and movie stars accept the stories in the spirit in which they were done and often ask for original drawings of caricatures. When we told Hertz car rental that we wanted to do a takeoff on their man-dropping-from-the-sky ad, company officials let us use a Hertz car. There ‘s a feeling among advertisers that you ‘ve really arrived when MAD takes you off.

“I have to agree with them. Our total distribution now is close to 1,800,000 copies. We figure that one copy is passed around to five or six other people. That means we reach about ten million readers, which is a pretty good fan club for Alfred.”

THESE  comments raised an obvious question. I asked Mr. Feldstein if he could account for MAD ‘s mad success.

“Well, first of all, we love doing it. We have fun. The atmosphere around this joint is loose and easy. Some time ago, we learned that the subscription of a man in Haiti was going to run out. We asked ourselves why we shouldn ‘t go down and beg him to renew his subscription. No one could find a good reason not to, so we did and had a great time. He renewed his subscription, too.

“A second thing is that we don ‘t write down to kids or try to fool them. They can spot a phony a mile off. We assume that they have a fairly sophisticated knowledge. If we do a parody on a poem, they can ‘t appreciate the humor unless they know the original. We credit them with knowing the original.

“We try to be honest, and we never hesitate to kid ourselves. MAD carries no advertising because we don ‘t want the companies or their advertising agencies trying to tell us what to do. Coca Cola wanted to pay us a fabulous sum of money to do a takeoff on the Pepsi Generation. Luckily, William Gaines, our publisher, values independence more than money. We turned the idea down. 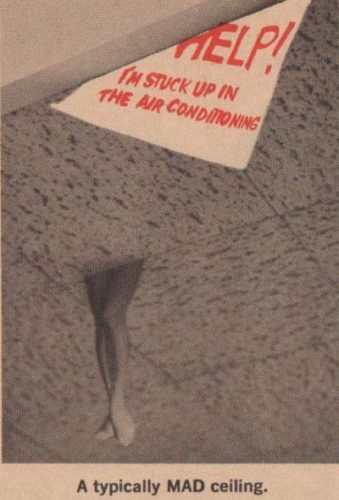 “Don ‘t get the idea that we ‘re crusaders or that we ‘re trying to change the world. We do want to make money, and our main idea is to provide entertainment. In our case, the entertainment happens to be humorous and satirical.

“Our readership starts around age 11. About then, kids move out of childhood and start thinking more realistically about themselves and the world. If they have any sensitivity and perception, they begin to realize that life isn ‘t one big fairy tale?that TV shows and advertise-ments can be ridiculous, and that human beings don ‘t always do the right things, and that life can have its phony or idiotic aspects.

“Boys and girls may feel these things but not be able to express them. MAD becomes their spokesman. It says, ‘Lets all laugh about these things together. ‘ In a way it becomes a safety valve, because it provides a release for resentments or frustrations that young people feel against a world they didn ‘t make and can ‘t control.

“I think satiric humor is basically healthy. It puts things in perspective. You start taking life too seriously and you can become a fanatic grim, humorless, and maybe dangerous. Did Genghis Khan have a sense of humor, or Hitler, or Stalin? If only enough Germans had laughed at Hitler during one of his nutty speeches, he ‘d probably have exploded on the spot, and that would have been the end of him.

“Of course there are limits on satire. We stay away from questions of religion, and we always keep in mind that we must have parental acceptance. Poking fun at every belief or ideal just for the sake of mockery could be destructive. It all comes down to a question of balance, and we think MAD provides a pretty good counterweight to the silly, phony, and pompous sides of life.”

Mr. Feldstein tossed his pencil on his desk.

“Come to think of it, I ‘m beginning to sound pretty pompous myself. Alfred up there is liable to give me a few well-deserved horselaughs. The main thing is that we have a ball. We do what we like to do and keep punching. That is the secret of MAD ‘s success.”

Up on the wall, I could have sworn I saw Alfred E. Neuman wink.

Washington Examiner with What, Me Worry? Cover

Tales From the Crypt: The Revolutionary Art of Mad and EC Comics Exhibition Catalog