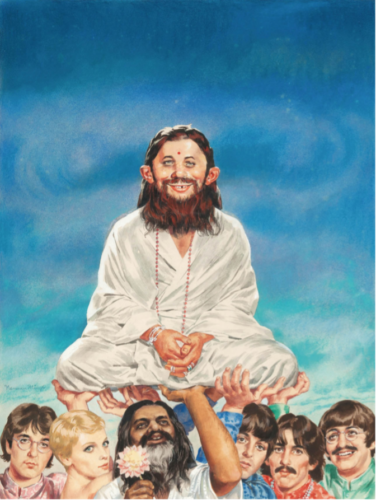 FOR WELL OVER A century, humans have been reproducing images of the carefree idiot known today as MAD Magazine ‘s Alfred E. Neuman. His wide, gap-toothed grin and perpetually optimistic attitude in the midst of worrisome circumstance has, for some reason, captivated us for at least 125 years – long before MAD was ever a glimmer in Harvey Kurtzman’s eye.

What is it about this yutz ‘s face that makes people laugh, forget about their worries? Like many before me and doubtless many after, the face piqued my interest at a young age, motivating me to seek out the origin and early permutations of the “What – Me Worry?” kid; confoundedly following the gaps in the bizarre history of a meme familiar since the Gilded Age.

Having read numerous origin stories of the happy half-wit, I’m curious to know what the MAD Members of the Fan-Addict Club think about his beginnings. Two accounts in particular seem to hold up over discussion, and I’d like to compare them here.

The first origin story posits that the boy comes from the pages of America’s premier humor magazine, PUCK, a political cartoon weekly, published in midto-late 19th century New York City – just up the street from 225 Lafayette St., the future home of E.C. Comics.

In the pages of PUCK, lithographic caricatures of Irish politicians, African American servants and Jewish merchants took on a decidedly stereotypical bent, as was the custom of the time – images that, viewed in today’s context, are breathtakingly offensive. This first origin story offers evidence that the gap
toothed boy has roots in the stereotypical depiction of a drunken Irishman, complete with red hair, slouched posture and Neanderthal face. 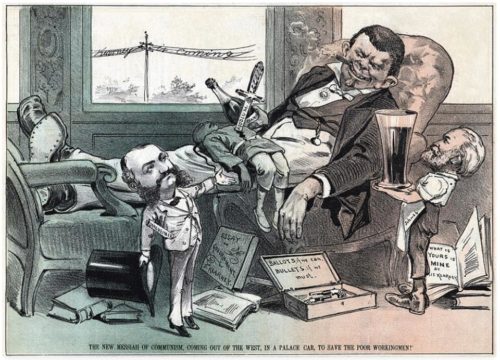 To be sure, while an inebriated Irishman may display a particular ease of spirit, he doesn ‘t seem to fully embody the wry unflappability that bid the boy ‘s image to be endlessly reproduced. While these Irish stereotypes were quite prevalent in the same period as the second popular origin story, beyond their common era, I see no evidence the stereotype is Alfred ‘s progenitor.

After scrolling through 40-odd years of PUCK archives, I will concede that some of these stereotypical Irish caricatures bear an uncanny resemblance to Alfred. All of the images, however, lack one important detail – the iconic missing tooth.

The missing tooth implies an unseen character history that sets the face apart from ethnic caricature, one that tells a simple and inviting story.

How did he lose the tooth? Why doesn ‘t his injury worry him? Seemingly immune to the warped logic of the universe he inhabits, this irrepressible fool is the ideal personification of MAD ‘s subversive brand of “Humor in a Jugular Vein.” It ‘s
not hard to see what Kurtzman saw in the perplexingly charming face. 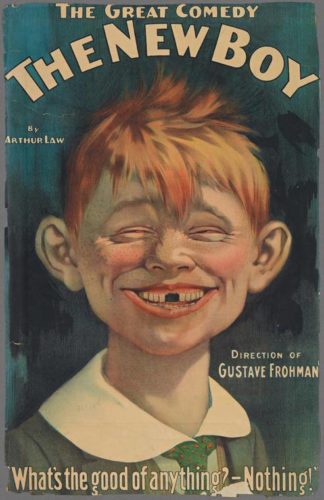 The second origin story, and the one most plausible to me, is the show bill of the 1894 Broadway production of “The New Boy.”   An apparent success, “The New Boy” had multiple New York  productions before completing a back-breakingly expansive five-year tour of North America. Ostensibly seen in every corner of the continent, the poster shows a wide-smiling boy with big ears, messy red hair, and missing teeth. His edentulous, goofy smile was a shoo-in for newly advertised advancements in “painless” dentistry. 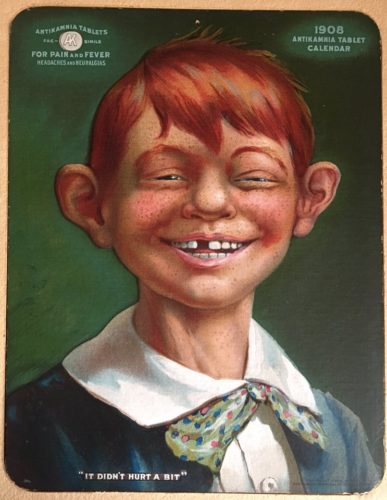 Pharmaceutical company Antikamnia released a calendar in 1908, bearing a strikingly similar face to that of the Broadway production’s poster, down to the collar and dotted tie. Quoted as saying “It didn ‘t hurt a bit,” the pain pills proffered by the boy ‘s image went on to kill an approximate average of 7,176 people in three years, and prompted the formation of the United States Food and Drug Administration.  In 1914, the Stuff and Wilson Printing Concern released their “Original Optimist” image with the boy’s face softly refined, appearing almost photo-realistic, and wearing a thin ribbon tie over a buttoned-up vest and suit jacket.

Harry Stuff ‘s widow would later take MAD to court for copyright infringement and lose when MAD produced earlier versions of the face as evidence of its ubiquity. 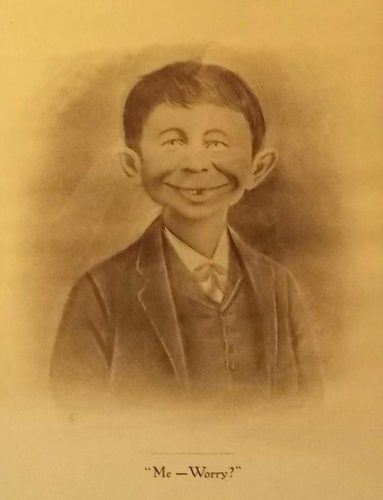 In the 30’s, a greeting card company further refined the boy’s visage, adding the classic tousled silhouette of hair we recognize today, and including an actual red string tie for effect. The boy appeared on novelty postcards, matchbooks, war propaganda, painted on the noses of military aircraft, electioneering materials and eventually atop the bodies of  giant fiberglass men holding automobile mufflers along the interstate.  It was in postcard format that the face duly inspired Kurtzman, pinned to the office wall of Ballantine Books editor Bernard Shir-Cliff, as Kurtzman visited to talk shop about MAD ‘s first paperback book, The MAD Reader. Kurtzman pocketed the postcard and pasted the idiot ‘s face to the cover art of the book, then to the cover of the MAD comic book, continuing to pepper it through the early issues of MAD magazine. 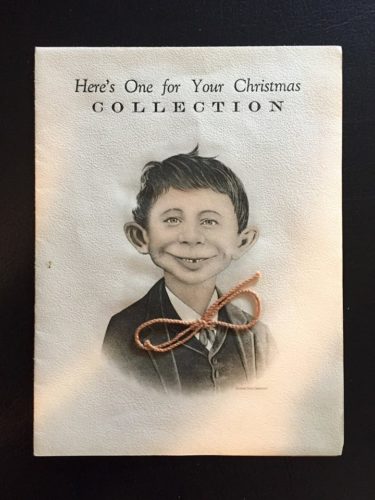 After Kurtzman ‘s storied split with Bill Gaines, Al Feldstein returned to E.C. to helm the editorship of MAD, and sought to elevate the kid to mascot status. Through a tiny ad in the classifieds of The New York Times, exquisitely talented illustrator Norman Mingo was lured out of early retirement to immortalize the face. Mingo ‘s definitive image debuted on the cover of MAD #30. Feldstein attached his old EC nom de plume, Alfred E. Neuman, and the rest is comic book and popculture history.

Along with this post, I’ve uploaded a gallery of notable iterations of Alfred throughout the centuries. I’m curious to hear your thoughts! Where do you think he came from? Is he an evolution of a stereotype, or is his grin communicative of something larger and far more universal?