One day in 2004, I was snooping around in my grandparents attic, when I found a box of stuff that belonged to my uncle and dad,inside the box was 3 issues of mad magazine #122 #131 #141. I was drawn to the art of it and the humor of making fun of the times. Inside the issues was crazy drawings of the style I enjoyed doing…so I was hooked and began to ask my dad and uncle all about Mad…being that I come from a family of collecting, I had found my calling.

So a few weeks later I was at the grocery store with my mom and saw Mad magazine still was around, so I asked my mom if I could get it…. of course she said. So my first official issue was #441.

My birthday was around the corner so I wanted a subscription which I got. Then I discovered Ebay…this is where i became really addicted to mad. Also I found Doug’s coversite to look at issue covers. I printed out the pages to mark off ones I had.

At first I was only collecting the regular issues that I liked the covers of, then I wanted the complete run of my birth year ( 1990 ). After that I just wanted them all. So I would buy lots on ebay and build my collection slowly as I could since I didn’t have a job and was just a kid. Years past and slowly my collection of issues got bigger. But once I became able to drive and chase girls mad wasnt my focus. But once I grew up and made good money I was back to collecting to finish what I started.

Once I turned 20 tattoos became to draw me into Art. So I started get Mad tattoos. Which I have 9 or 10 mad related tattoos.

In 2018 I became a professional tattoo artist, then opened my own shop, which I was making money…so why not finish what I started back in 2004…so ebay here I come.

I became close with a collector on ebay named Keith Tubbs which i bought thousands of dollars of mad stuff from him. Plus stuff from other sellers and collectors from the Mad fb pages.
I only collect Mad magazines and Mad Merchandise from USA. Unless its really cool and I must have it.

My favorite mad items I own are the mad squirt toys and my mad slot machine. I am only missing a few issues from my collection which I will get sooner or later.

My Collecting will never slow down, just will be even more MAD. 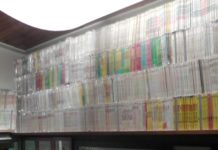 One boy’s attempt to collect every MAD paperback printing