Axoiotl. Potrzebie. Veeblefetzer. if you ‘re one of the millions of former adolescents who grew up on MAD magazine, these seemingly meaningless syllables should conjure up forgotten fragments of your childhood faster than madeleine cakes got to Proust. But from ist beginnings as a 10-cent comic book 40 years ago to its current status as the joker in the media pack, MAD has best been known for ist artists: Jack Davis, Mort Drucker, Wally Wood, Don Martin, Dave Berg, Sergio Aragonés. Over 100 works by these and other members of the Usual Gang of idiots can currently be seen at Artspace in Raleigh, where “Humor in a Jugular Vein: The Art, Artists and Artifacts of MAD Magazine from the Collection of Mark J. Cohen“is on display through December 6. 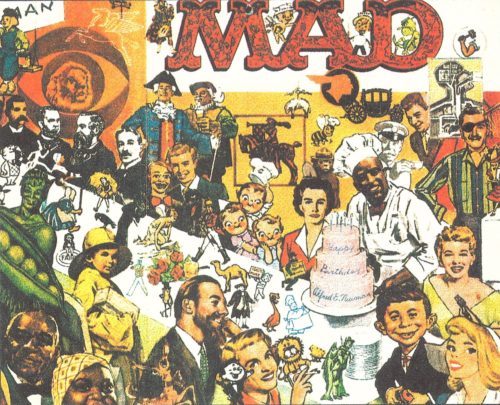 Cohen, a reaitor and part-time gag writer from Santa Rosa, Cai., has been collecting cartoon art for decades. But it wasn’t until 1989, when MAD founder William Gaines began auctioning off the magazine ‘s artwork, that he could indulge his passion for MAD originals. “Humor  in a Jugular Vein” contains the cream of Cohen’s cache from MADs ï¬rst two decades, including Norman Mingo ‘s front-and-back cover spread of mascot Alfred E. Neuman being congratulated on the magazine’s ï¬fth anniversary by Betty Crocker, Elsie the Borden Cow and 93 other advertising symbols (talk about product placement), and a 1958 cover by C.C. Beall that creates a portrait of Alfred out of caricatures of 29 current celebrities (Elvis Presley and Lucille Bail are the ears).

“Humor in a Jugular Vein”–a title taken from MADs original slogan-— opened at Artspace on November 6 as the kickoff event of the third annual convention of the Southeastem Chapter of the National Cartoonists Society, a gathering homed by Dwane Powell of the News & Observer and Cuiium Rogers of Spectator magazine. The show debuted last year at the Museum of Cartoon Art in San Francisco, and has since traveled to museums and colleges in half a dozen other cities, but the Artspace engagement is its ï¬rst-—-and so far only-— scheduled appearance anywhere on the East Coast.

[This article was published in the Triangle City Magazine, further information and date unknown]