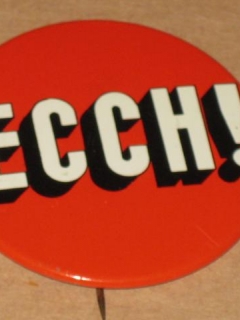 This is a promotional pinback button from the Chicago company of The MAD Show, a popular off-Broadway smash hit musical. This particular button was produced as a giveaway to theater-goers at the Happy Medium theater, where the Chicago version of the MAD Show was being shown. One of the scenes from Act One was called, "ECCCH", and this pinback was produced in tribute to that scene. But, it was discovered that the word "ECCH" was misspelled, and was missing a letter "C". Ultimately, these pinbacks were disposed of after the discovery of the spelling error, although a few were saved by a cast member.