One Fine Summer: How I Avoided Sunshine by becoming a MAD Intern

Instead of enjoying outdoors and warm weather like most University students on summer break, I decided to sit indoors under incandescent office lighting. For money? No! For jokes!

All kidding aside, it was a dream come to true when I got the phone call that I had won Mad Magazine ‘s Summer Intern contest. As a kid, Mad Magazine had practically taught me how to read which is why I still think Shakespeare ‘s little plays could be improved with words like BLECCH and ZOINKS!

The Mad Magazine internship was an amazing experience because of the comedy education I received from joke writing legends like Mad ‘s Senior Editor Joe Raiola and Editors-in-Chief Nick Meglin and John Ficarra.

I was fortunate enough to share an office with the very funny Greg Leitman who was super patient with me as I asked him endless questions about joke structure and his personal life. And may I add, not once did I catch him stealing my lunch. Not once. Did I catch him. But I suspected! Boy, did I SUSPECT! Haha :)

I remember heading into Manhattan and entering the elevator for my first day at MAD. You can see MAD has its own floor. 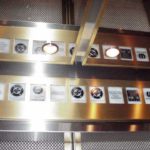 When you step off the elevator you are greeted by some classic MAD covers framed on the wall. 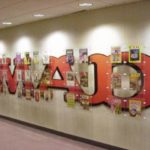 Here is a close-up of the White Spy! 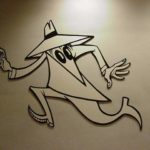 Before MAD, my major comedy experience had come as a radio host. On the radio, you must be very quick with your humor and the audience understands that some jokes will be hilarious while others won ‘t work but that ‘s OK because another funny comment is coming soon. And if the joke or story itself isn ‘t the funniest, you have a chance to make it funnier with your voice.

But on paper you can ‘t save a mediocre joke with a silly voice or with great timing. All you have is the writing. Those words are staring the reader in the face so they had better be funny!

You might think the office of a comedy magazine is a bunch of wacky people joking around… and it is, but it is WORK. We would sometimes spend HOURS on ONE line. Everybody would give their opinion of the joke and try to improve it.

I learned that the first draft of a concept will be shredded. It ‘s just the beginning. This schooling really improved my comedy writing and I give credit to the great MAD minds for instilling this type of writing discipline in me.

Since MAD, I have used this skill in writing jokes for my stand-up comedy and for my helpful and hilariousprofessional dating advicevideos on my web site.

The staff at MAD was so gracious to not only allow me to sit-in to listen in meetings about which topics to parody but they also encouraged me to participate! For my entire life I had been reading this magazine and now they wanted my feedback! I was excited and intimidated but mostly, I was very humbled and grateful for this opportunity. 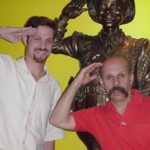 When you are selected to be a MAD intern, they award you with a special hat! 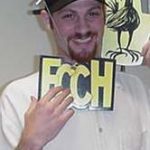 Editor-in-Chief John Ficarra anticipates rain inside the building. John has a great mind for comedy and precipitation. 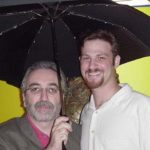 The highly skilled and beautifully bearded Art Director Sam Viviano decided to nestle my man-bosoms for this photo. I have no idea why he decided to do this, but it made me feel warm inside. Haha :) 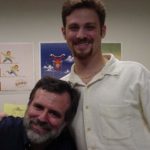 I felt honored again when legendary MAD artist Dave Berg put me inside one of his “The Lighter Side” comics!

After my internship, I was fortunate enough to be published by MAD! I became a paid comedy writer having been published in my all-time favorite humor magazine. It felt awesome.

Then I got amazing news. Tom Richmond would be the illustrator! When I think of today ‘s MAD Magazine, THE man is Tom Richmond because his artwork is tremendously fun and it rates with the best comic-style art you have seen in MAD. Without seeing the name on the magazine or even any words, you look at his style and you just think, that ‘s MAD. He ‘s taken the tradition to the next generation and it was an incredible privilege to have my writing paired with the extraordinarily talented Mr. Richmond.

Below is one panel from my two-page article that made fun of the fact that some baseball teams are rich while other teams are so poor they must do some drastic things to save money! 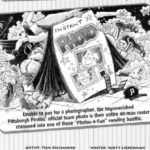 As you can see, I used my given name for my writing credit although now I perform comedy using the stage name HogWild. Today, I am creating funny  dating advice  videos where I build upon what I learned with MAD ‘s professors of comedy.