The following article was originally published in Dynamite Magazine Number 47 from 1978. Reprinted with permission from Scholastic Inc.

MAD magazine has been described us everything from tasteless trash to important satire. During its long history it’s been called idiotic and even un-American. But somehow, despite its critics (or maybe because of them), MAD is America’s most popular humor magazine. Not long ago. MAD celebrated its 25th birthday.
so Dynamite decided to see for ourselves how things are going at the MADhouse. 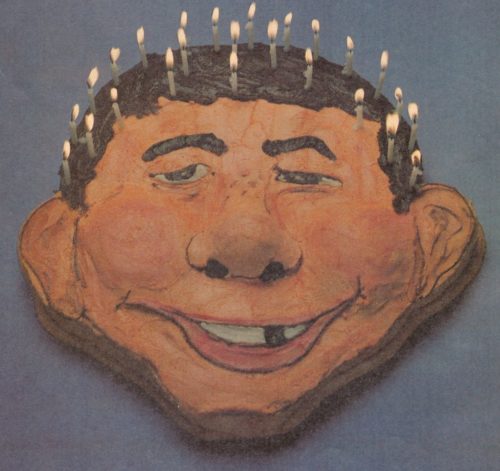 Our first stop was, of course, the office of MAD’s publisher William Gaines. What an office! It certainly didn’t look like the office of the chief executive of a million dollar publishing operation — but then Gaines doesn’t look like the executive type either. lf Gaines ‘ long gray hair and baggy clothes don’t startle a visitor, the huge King Kong head staring in the window and the many miniature zeppelins hanging from the ceiling will. “I have an admiration for big things,” Gaines explained. “King Kong, the Empire State Building, ocean liners, and zeppelins. Maybe it’s because I’m big,-” Gaines said with a hearty chuckle.
The MAD story begins with Gaines. His father was a successful publisher of comic books in the 30’s and 40’s. When he died, Bill took over the company, EC Comics. Gaines and a young artist, Al Feldstein, produced horror, suspense, and science fiction comics, while another editor, Harvey Kurtzman, was doing war comics.
One day, Kurtzman asked Gaines if he could put out a humor comic book. Gaines agreed and MAD was born. The first MADs satirized other comics. Prince Valiant became Prince Violent and the Lone Ranger became the Lone Stranger.
Gaines ‘ big moneymakers were the horror comics, but during the early 1950’s, many people thought horror comics were a cause of juvenile delinquency. A congressional investigation was begun and EC’s comics were singled out as most harmful.
“They’d interview a kid who stabbed someone and find out he read comic books. It didn’t matter that he also played baseball and drank milk. It was the comic books that made him a criminal,” Feldstein remembered.
Eventually, Gaines stopped publishing the horror comics. EC began to lose money, so Gaines had to let his staff go. Only MAD was still selling well.
Shortly after that MAD changed from a comic book to a magazine. Then Harvey Kurtzman left to start another humor magazine, and Feldstein took over MAD.
Feldstein rounded up a new staff and changed the direction of MAD. Instead of just satirizing comics, he thought “MAD should do satires of movies, and things that were bugging people like advertising and false packaging.” 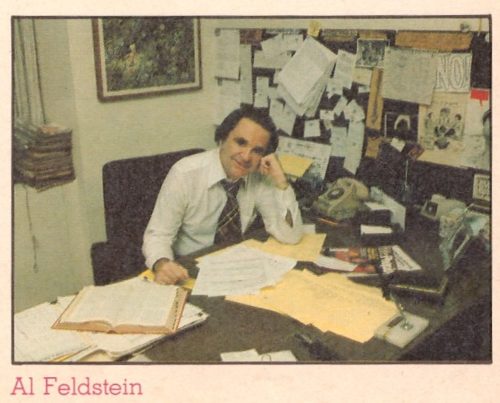 Jerry DeFuccio, who had worked on Kurtzmans war comics, also joined the staff. “Had it not been for comics, I might have become a doctor like my father,” Jerry told
us. “My father used to tear up my comics as fast as I brought them home. I-Ie couldn’t see why I wasn’t satisfied reading the Sunday funnies.”
“I went to school to become an illustrator,” Nick Meglin, MAD’s other associate editor, told us. “When I got out of the army, Al offered me a job on MAD. I thought it would be a good thing to do in between the army and my art career. This has turned into the longest temporary job in history.” Iust then Dave Berg, who writes and draws The Lighter Side, dropped into the MAD office. We asked how he started working for MAD. “I wrote a piece for them freelance and they bought it,” Berg answered. “They’ve been demanding their money back ever since.” 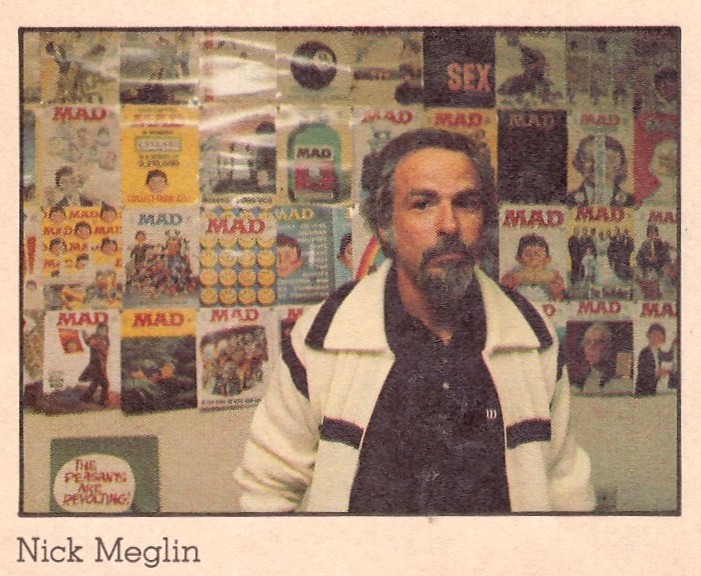 MAD’s circulation soared as the magazine took swipes at celebrities, movies, TV, life in general, but most of all at advertising.
Jerry recalled one parody which blasted Scotch tape’s claim that it had a million uses. “That meant they want you to waste it, ” Jerry joked. “We did a spoof where the payroll guard at the Scotch tape company was taped to his chair, while Nick Meglin, dressed as a burglar, went through their safe. ” Another tape company saw the spoof and asked how it could get a parody of its tape. “Just come up with a stupid ad campaign and we’ll spoof it,” Jerry told them.
Occasionally, someone takes offense at a parody, but Gaines says, “We don’t get sued too often.”
Gaines recalled one MAD feature that did cause some trouble. “We printed this fake three-dollar bill and it turned out it worked in some change machines. Some guy in Texas was making a fortune buying MAD at a quarter and getting a buck in change back. A government official took our printing plates and made us promise not to do it again.” 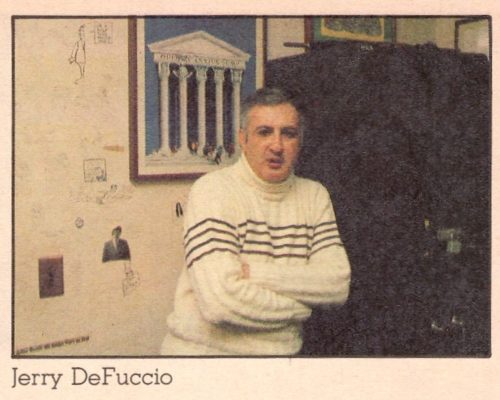 MAD sometimes receives 500 letters a week, though Jerry says “not all of them are intelligent.” One of Jerry’s favorite letters is from Clint Eastwood. Eastwood liked the satire of Dirty Harry so much he jokingly asked the MAD staff to write another satire so he could use the ideas for his next film.
In 1952, when MAD began, there were probably few people who believed that MAD would last 25 years. In its first quarter century, MAD has grown into a big business, publishing six foreign editions and over 100 paperback books. There’s even talk of a MAD movie. Now that MAD is approaching adulthood, will it begin to take things a little more seriously? Alfred E. Neuman would have a word to say about that idea — Yeccchhh!